I feel somewhat compelled to write a blog. Partly out of guilt, partly out of counter insurgence (I learnt that term from Sky News).

I said some things over the last few days about the Isle of Wight, and took some flack for it. I grew up on the island, and for all it’s beauty, beaches and ‘old schoolness’, it’s a place that fills me with nothing but horrible memories.

A childhood spent getting abuse for being in a wheelchair, then abuse for having an outspoken father. So much to the point that my parents were told to remove me from a school because I was becoming a problem (smacking twats for calling me names). Yet these are the ‘ADULTS’ that I should be happy brushing shoulders with and smiling in the beautiful island scenery.

This looks like its turning into a me me me blog, and who gives a fuck about my opinion? Well, you’re on my website, so you must care a little.

I’ve spent my adult life writing songs. All full of anger and pain. It’s my release. It’s how a man with as much darkness in his soul as me, is still alive.

He’s being miserable to be cool! Trust me, being dark ain’t cool. Skinny brats that watch 90210, hate their parents (while letting Dad pay for their Uni tuition) and want to kill (be popular) themselves, aren’t cool. And I want nothing more than to smile…a lot.

But I don’t. I’m not a happy person, and I harbour fuck loads of anger. But that works for me. It made me an international beach soccer goalkeeper, and it makes me write meaningful songs.

For those of you that like my songs, I am iternally grateful. But please accept that every now and then, I will snap.

I had/have band mates. They take the plaudits for those songs, and rightly so, because without them, they would NEVER have been expressed in the way they were. But they go home to their wives, to their children, and to their happiness. I go home to the very bile, the very inner torment that CREATED those songs.

So don’t hate me when I outburst.

I apologise if I offend, because offending is never my goal, but I don’t apologise for being honest, because that, as humans, is the only freedom we have left.

The Isle of Wight, the Island I grew up on, is being murdered, and YOU the locals are doing NOTHING to stop it.

You accept a ferry company that charges £166 for a car to travel FOUR miles to go on holiday (KILLING THE TOURISM) and YOU elected an MP that stands vehemently AGAINST gay marriage.

Again, I apologise for offence, but…

I’m waiting to confirm the venue details and times etc. But a massive honour for me.

I’m playing at the V Dub Festival tomorrow night. Will be on the main stage about 9pm.

Really looking forward to getting back up on stage here on the Isle of Wight.

On Saturday I’m playing an acoustic show at Appley Beach. The show is to celebrate 125 years of the carnival in Ryde. It’s the oldest carnival in the UK.

I have been given an email address for The Peoples Voice television channel.

I’ll be hosting a music and arts show, on the station, from October/November this year.

The show is called The Banned, and will feature everyone, and everything, as long as it’s good, and interesting. There are no mainstream “You’re too old/fat/outspoken” rules on my show.

To get yourself considered for the show, email gareth@thepeoplesvoice.tv.

I have a show in York on Wednesday, at Fulford Arms.

It’s totally free, so if you want some live music, just pop down.

Last Friday in Manchester was my first show with the new band, and it went amazingly. We’re playing a few free shows, just to get our eyes in, before heading off across the UK and Europe, at the end of the year. 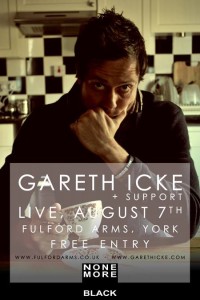 I have a couple of Manchester shows this weekend.

On Friday I’m playing at The Castle. It’s an invite only event, and I think it’s sold out. Although, if you email eromenosmedia@post.com, there maybe a ticket or two available.

On Sunday I’m playing at the Antwerp Mansion, just off the Curry Mile, Manchester.

I am playing a solo acoustic set as part of the Storytime Festival.

Hope you’re all good and happy and stuff.

My label are currently putting together a tour of the Czech Republic.

The dates will be confirmed as soon as possible, but they’re planned for October this year.