I’m back in the studio this Thursday after a month away with a broken leg. It’s still broken obviously, but now it’s full of metal, I’m ok to get into the studio.

We’ve got a few new features including a brand new phone prank called ‘the interrupting Spaniard’. All will be explained on air, but he probably looks a bit like this guy.

This weeks themes are…

What is your favourite sports team, and why? Every one has a favourite team. Whether it be football, Ice hockey, Rugby or Curling. Do they have Curling teams? Probably in New Foundland or somewhere like that.

Why do you support them? Did you live near the stadium? Do your family follow them? Or did you support the rivals of your ex’s team, just to piss them off?

If you won the lottery, what’s the first thing you’d buy? Would it be a massive, outlandish purchase like a Ferrari? Or would it be a pack of gum to freshen the breath before telling the Mrs it’s over?

What is your wedding first dance song? If you’re married, what did you have as your first dance? If you’re not, what do you want? If you’re a guy, accept that you’ll never have the one you want. After all, it’s ‘her day’. But if, in a magical World, relationships were actually equal, what song would you like?

This Thursday on Vectis Radio from 7pm.

I’m writing from my hospital bed. It’s been a weird couple of days in the life of moi.

First of all, a massive thank you to everyone that has checked out the video for ‘Remember who you are’. The track has now received over 21,000 views in it’s first three days online. That’s not bad going!

If you haven’t already checked out the video…here it is.

The track will be available for download from itunes, amazon, play.com etc in the next few weeks. I’ll let you know as soon as it’s up.

The rest or the album is currently being mixed and mastered and will also be available within the next month or so. The record, ‘A brand new battle’ features ‘Remember who you are’, as well as eleven more brand new tunes.

Again, I’ll keep you up to date with progress.

As I said earlier, I am writing from my hospital bed. So if there are any spelling mistakes, blame the copious amounts of morphine I have flowing through my system.

This is why I am here. 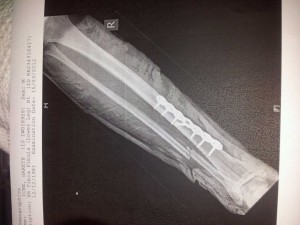 I’ve been pieced back together with 7 screws, a plate and a bone graph. That will teach me for playing football won’t it!?

I get out of hospital and it’s a long recovery of 6 weeks in a wheelchair, then 6 weeks using crutches. But what this extra time does mean, is plenty of booking gigs.

I’ll be booking up UK and European tours for July and August.

It’s all about being positive, and that’s not just the medication talking!

Here is the music video for my next single, Remember who you are.

The lyrics are available here.

Massive thanks to Miki, Sean, Guy, Tim, Claydon, and everyone involved in making this video.

Hope you’re all well. This is the 4th day on the trot that I haven’t left the house. The reason for this? 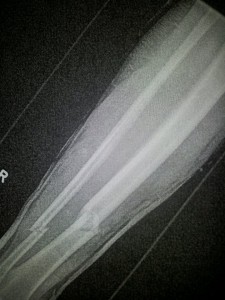 Yep, that’ll keep you off your feet for a while!

I’m spending my days filling out ISRC codes for the new album (very boring) and watching reruns of Only fools and horses.

On Friday morning I go back into hospital where they make the final decision whether or not to operate. I’m hoping not for two reasons.

1. It’ll bloody hurt having my bone marrow drilled out and an titanium rod put down the middle of my Tibia.

Now normally I wouldn’t be so eager to be sat playing a guitar in a wheel chair while my heavily plastered leg is elevated, and exposed in a room full of drunk people. But this is for charity.

In May my big sister is climbing Ben Nevis in Scotland, for alzheimers charities. I figure, if she can climb the highest mountain in Britain, I can play some songs while off my tits on a cocktail of Tramadol, and German lager. 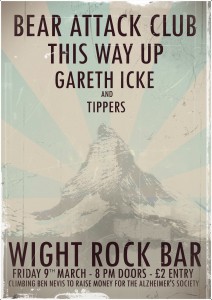 The show is at The Wight Rock Bar in Ryde, Isle of Wight. Doors open at 8pm and entry is only £2. All the cash goes towards my sisters charity fund. So please be a good sport and come along!

I’ll (touch wood) be playing about 8:30 with Tim Pritchard. Then This Way Up and Bear Attack Club will be finishing off the evening.

The music video for ‘Remember Who You Are’ is nearly completed. I have seen a sneak peak and it looks awesome. It should be ready by the end of next week.

I can’t wait to get it out there and let you all have a watch. I hope you’ll enjoy it!!!

Sorry I’ve been a bit slack on the updates front. I do have a valid excuse this time though. Since Saturday I have been in hospital on enough Morphine to take down an Indian Elephant.

I broke my leg playing football and needed to be rushed to hospital for treatment. I broke both my Tibia and Fibia just above the ankle.

As soon as the tackle was made, I heard the crack and knew something wasn’t right. Unfortunately, human nature meant I tried to get up. I looked down to see my leg sticking out the wrong way and basically flapping like a flag in the wind.

I’m back in with the specialist on Friday to decide whether or not surgery is required or not. Touch wood it isn’t.

Then I am in a wheel chair for a month, another two months of plaster and crutches and then the rehab starts. I don’t think I’ll be able to walk without help for around six months. Then 8 months until I can run.

If I want to play football again, it will be at least a year. Although I am not holding my breath that I’ll play again. The break was pretty horrific.

So there, that’s my excuse. Now bring me grapes! 😉 x

This Thursdays G & Tippers Show is a first ever live music show. We have the wonderful Jono flying down from Glasgow to play live in the studio.

Jono will be playing the tunes that made him a favourite with BBC Radio DJs and fans across Europe, as well as some new unheard songs from his new album.

In honour of our guest, the show will don a Scottish theme. This means…

Scottish challenges. (How many shortbreads can you eat in a minute?)

Plus, we want you to tweet your ‘Englishman, Irishman, and Scottishman’ jokes.

I know the Irish tend to be the punchline in those jokes but A. We can’t offend Jono TOO much. And B. I couldn’t think of anything else.

Get your tweets in to www.twitter.com/gandtippers.

Check out Jono and his music at www.meandmyguitar.com.

This weeks show was meant to be a solo affair. Tim is in Spain making love by the pool, so I figured I’d be all on my todd. But I was wrong! This weeks show will instead be very very crowded!

The line up is as follows.

Our themes are a bit personal too. Valentines Day tales, favourite ‘Power Ballad’ but more importantly, we want to know about your FIRST TIME. No holding back. We want the details. Tweet us at www.twitter.com/gandtippers

Add that to some phone pranks, World record attempts, discussing the links between fat people and paedophiles, and god knows what else, and you’ve got a radio show.

www.vectisradio.com from 7pm Tonight. And don’t forget, you can also listen on your phone by downloading Tune In Radio for free.

Hope you’re all good and stuff. It’s Valentines Day so I hope you got some nice gifts. Chocolates, flowers, condoms, whatever floats your boat. I didn’t get a card this year. But then why would I? According to this gentleman, I don’t even know my own sexuality.

This guy has dedicated an entire webpage, and VIDEO to the fact that I am gay. That’s some serious dedication I must admit. His proof is pretty overwhelming. Please check out the video for yourself.

His name is Chris Constantine and according to the BBC, he has ‘serious mental health issues’.

That was an interesting watch for me yesterday I must admit!

Anyway, back down to planet Earth.

I have completed the music video for ‘Remember who you are’. It’s now being put together and special affects added. I can’t wait for you to see it.

I won’t give too much away but in the space of 3 hours I blew out a girlfriend, got hit by a car, ran through a graveyard, and attended my own funeral. Just another normal day in North London.

As soon as it’s completed, the link will be spread far and wide. Much like my legs are as I’m enjoying another mans company.

Do you reckon Mr Constantine has a secret fantasy about me? Maybe.

On March the 9th I’m playing my last show on the Isle of Wight for quite some time. At the end of March I’m moving back up to Derby and won’t be around the South coast any more.

The show on the 9th is at The Wight Rock Bar in Ryde. It’s to raise money for my Sisters charity climb of Ben Nevis.

Bear Attack Club, This Way Up and myself will be performing. All for a mere £2. Doors open at 8pm. Get your arse there! 🙂

I shouldn’t really be talking about arses. I’ll give you all ideas.

You know sometimes you see or hear something and you just have to share it? Well this is one of those moments. You have to check this out.

Watch from about the 8 minute mark. One word ‘WOW’…