Just a quick message to wish you all a merry Christmas. Not a religious man, but I am a beer and food man. So have fun being merry and friendly with each other.

Check out gandtippers.com to see what this weeks show is all about. It’s a Christmas Special y’know.

I am playing a charity show tomorrow (Friday 16th) at Coburgs in Ryde, Isle of Wight.

On Friday there are three bands. Bandit The Panther, The Rozzers and myself. There is a suggested donation of £2. Two quid for three acts, and you’ll be helping give babies a fighting chance.

Do something good this Christmas. £2 isn’t even the price of a pint, but collectively, it can make a massive difference.

Hope to see you there.

I went into the studio today and blasted out the vocals on another 3 tunes. I have now completed 8 tracks and only have 4 more vocals to do before the album is complete.

I know it seems like it has taken ages but all together so far, it’s only taken 14 days. I have had to spread it out due to costs but to nearly have an album done in two weeks, is pretty impressive in my book.

The financial situation that musicians have to face is incredible. Did you know that my first album, It gets worse at night, was released on iTunes on December 7th 2009? That is nearly 2 years to the day, and I have still not seen ONE PENNY of the sales revenue that album generated. Pretty mad eh?

So for that reason, this album has taken longer due to the distinct lack of funds at my disposal. I guess that’s why so many acts these days come from privileged backgrounds and attended private schools. They need Daddies money just to fund their careers.

But, despite what you may have read about my family in the papers recently, I come from a normal working class background and therefore, funding an album takes it’s time.

They may have the funds, but at least I have the soul.

Basically, I just went round the houses to say, ‘Sorry it’s taken two years to come up with a second album’. I just hope you think it was worth the wait!

I was using the working title ‘The Non-Delivery Boy’ for the record. Based on the fact that I have promised much in several different areas and failed to deliver in each. Did you know I was once voted by Bob Wilson (Arsenal & Scotland) as ‘The most promising goalkeeper in Britain’? There’s a fact for you!

But despite not quite making it in football, Ice Hockey and music, I am very proud of what I have achieved. Representing your Country is certainly not something to feel bad about. So for that reason, I have scrapped the title. It’s too negative. I want this album to be a positive thing. A rebirth after a couple of pretty horrible years personally.

Now I’m thinking the title ‘The long road to the middle’ is more fitting. Some people have bumpier rides than others, but fundamentally, we’re all going to the same place. We’re all equal. 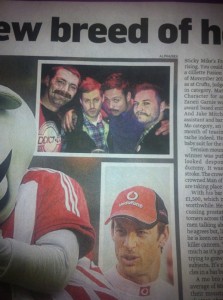 I’m second from the right by the way.

I was meant to start the vocals on the new album today. I have been mega excited all week about getting the vocals for Satellites & Wires and Jenny down today.

Unfortunately I’m in bed ill. Annoyed. So won’t be able to start til tomorrow. I guess it’s best to rest up rather than deliver some below par vocal tracks.

I hope you are all splendidly well.

I have finished the tracks for my new album. On Monday, I start the vocals. Should be finished with them within the next 3 or 4 weeks. Then a quick mastering and it’s all finished.

Jenny, Satellites & Wires, Colours, Remember Who You Are, A Brand New Battle, What’s Love Without Meaning, Paint The Town Red, Beat Up, Growing Pains, Don’t Say It, Adrienne & Sleep With The Girl.

I don’t have an album title yet but I’ve been using the working title of ‘The Non-Delivery Boy’. It seems that in my late twenties I’ve realised that as a footballer, musician & ice hockey player, I promised much, but never quite delivered. So I guess the title is a tongue in cheek dig at myself.

I can’t wait for you to hear the record. It does sound great. Totally up another level from ‘It gets worse at night’. As long as I am getting better and not worse, I should be pleased right?

As soon as the record is done and released, I’ll be back out on tour across Europe and across the UK. I’ll keep you posted.

Tonight is Thursday night. That means one thing. The G & Tippers Show. On tonight’s festivities is the legend that is Alex Lloyd. Massive MASSIVE artist from Australia. He’ll be pitching his wits against yours truly in the G & Tippers quiz. I hope I won’t let my fellow English down!

Also, check out my Movember efforts. I think you’ll be quietly impressed.

First, can I apologise for the lack of G & Tippers.com action recently? Our servers have been having a few issues and we’ve been unable to get access to the site.

All back and running now though folks!

In the last few weeks we’ve been having multiple themes within the show. You listeners really are spoilt y’know. I hope you appreciate our dedication! 😉

This Thursday will be no different.

We have a bit of an Alex Lloyd special as the Australian legend is performing in London the following week. Hopefully we will be able to have a wee chat with the man himself as well as playing his genius tunes. If you didn’t hear the show in which we interviewed Alex, check out his official site and listen to some songs. They are special.

Because it’s been Remembrance Sunday this weekend, we wanted to have a feature that focused on memory. What are the weirdest memories you harbour from your youth?

It’s a weird thing memory. I can’t remember what I did last Friday, but I can remember EXACTLY where I was on September 1st 2001. Granted, England did smash Germany 5-1 that night. Not easily forgotten. But you get my point. What bizarre memories do you have?

Also, we want to know what your favourite cartoons are. It can be anything. Whether it be more adult based cartoons like The Simpsons or Family Guy or old school classics like Super Ted or Banana Man. Let us know.

And finally, we want your tales about the work place. What are the funniest, most tragic or generally odd things to happen while at work?

Tune in this Thursday at 7pm British time.

Just a quick note to tell you about this weeks G and Tippers Show.

This week, we’re talking about make ups, and break ups. We want your magical stories of how you met the love of your life. Did your eyes meet across a crowded room? Did you nosh him off in a pub toilet and decide it tasted ‘alright’?

We want your tales of romance.

But, as in life, there is no good without evil. Therefore, we want your best break up stories as well.

Let us know! Tweet us at www.twitter.com/gandtippers or email us at gandtippers@vectisradio.com.

The show goes out on Thursday night on www.vectisradio.com. 7pm til 10pm UK time.

Also, me and Tim are playing a show on Friday night at LA Bowl in Ryde, Isle of Wight. We’re on from 9 til 11 and entry is free. Plus, the beer is cheap.

On Sunday there is an awareness show to coincide with the turning of 15 years since the disappearance of Damien Nettles.

Damien disappeared from Cowes, Isle of Wight in November 1996. To read about Damien and the ongoing search for him, click onto www.damiennettles.com.

The show is taking place at The Princess Royal in Newport, Isle of Wight, this Sunday. Me and Tim will be playing an acoustic set at around 4pm.

Entry is completely free. Any support would be greatly appreciated.

After missing last weeks show for treatment in Germany, I’m back and raring to go.

This week we have two themes. Halloween is one. So we want your scary stories and best ever trick or treat experiences.

Also, Mr Mike Gammon suggested we talk about the ‘dumbest thing you’ve ever overheard’. And since he basically runs the show now, we have to go with it.

7pm on Thursday night at www.vectisradio.com. Get listening! x