I hope you are all very happy and smiling. In fact, I hope you’re all bouncing off the walls, overcome with sheer joy and emotion.

Tomorrow nights radio show will feature myself and Tippers writing a song live on air. It’s not just any tune though. We’ll be writing the masterpiece with YOUR words.

Simply tweet us at www.twitter.com/gandtippers or email us at gandtippers@vectisradio.com with your lyric ideas. We just need a single line off of each of you and we’ll piece it together and write the melody live on air.

The show goes out on Thursday between 7pm and 10pm British Summer Time and can be heard at www.vectisradio.com. You can also watch us on webcam at www.stickam.com/vectisradio.

Get your tweets and emails in people! 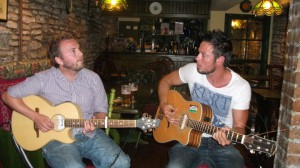 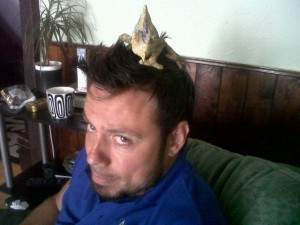 I’m down in Wales this weekend with Tippers and our mate Rich. We’ve come to surprise our old roadie mate Nigel. When we were in the band years ago, this man basically did everything for us. Drove us, cooked for us, kissed us goodnight and tucked us in to bed. You name it, he did it.

What better way to say thanks then to arrive at his house, drunk at 10:30 pm and smash on his front door shouting “Police! Open up boyo! We’ve got some questions we’d like to ask you”.

It could have back fired however when he opened the door with a clenched fist, ready to smash in the first person he saw. That person was me.

If anyone saw this weeks Isle of Wight County Press (www.iwcp.co.uk) you’d have seen a piece about our beach soccer trip to Italy. My club side, Sandown Sociedad are English Champions and are off in June to compete against the top club sides in Europe. I couldn’t have looked more Italian in the photo. Maybe there is something my folks didn’t tell me.

I’ll let you know if the games are on TV.

First of all, let me say welcome and thank you for visiting my website.

Basically I had different pages for all the different things I did. Jack of all trades, master of none and all that. But I figured it would make a lot more sense to have one website that encompassed the whole shabang!

I’ll keep updating what I’m up to. Whether it be musically, radio presenting, book writing or just generally being a doughnut.

I’m new too all this so it will gradually grow into a much bigger and better site the more I learn.

There is plenty of stuff on here though. You can listen to tunes, watch videos and the links are there for the radio podcasts too.

Please bare with me folks! Will be up and running soon… G x