This weekend I am performing at The Secret Garden Party Festival in Cambridgeshire. My Dad is giving a speech and I’ve kindly been asked to get up and play a few tunes before he comes on.

I’ve been rehearsing with the band in Manchester over the last couple of days. On the whole it’s sounding great. Obviously my touring has hampered rehearsals, but we’ll get there in the end.

On Tuesday I drove down south to hang out with my Dad, Steven Tyler, and friends. Had a really good time going around Avebury and Stonehenge. I was rather random, but lovely. Was nice to be in the company of like minded people for an afternoon! 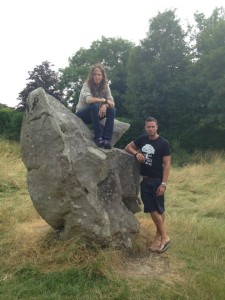 If you’re at the Secret Garden Party, come say hey. We’ll have a beer.