I think we can all agree that Donald Trump isn’t your every day, run of mill President.

See Presidents, Prime Ministers and indeed politicians in general, are taught never to give an honest answer. Swerve the question, lead the interviewer away from the original subject, or answer a question with a question. Whatever you do, don’t give up your genuine motives. Especially if they are clandestine.

You learn all this on day one of school. And while much of the population can see through this technique, as often a Government’s sinister agenda is viewable from space, at least they make the effort to conceal it.

American foreign policy has come under much scrutiny over recent years, and rightly so. An Illegal war in Iraq as well as enormous bombing campaigns and attempts to topple regimes in Afghanistan, Libya, Pakistan, Yemen, and now Syria, have left people putting together a link between the nations the United States invades, and those countries with large oil and gas reserves.

While America does pillage these nations for their natural resources, whether that be opium or gas and oil, that’s only part of the story, and is certainly not their sole purpose for being there.

The project for the new American century was published in 2000, and goes into details about what nations the US planned to topple. They are quite a way through the list already, with Iran and China on the horizon. This swift gobbling of nations has been helped considerably by the events of 9/11.

Almost a year to the day that the project for the new American century was published, New York City was attacked and the war on terror was launched. If you remember correctly, the same day the towers came down, killing over 3000 people, Israeli PM Benjamin Netanyahu described this horrific massacre as, “a good day for Israel”. For once, Bibi wasn’t wrong.

Donald Trump describes himself as the most pro Israel president in history, and given he has already moved the US Embassy to Jeruselem, something even ultra Israel supporters like Bill Clinton and George W Bush couldn’t bring themselves to do, and more importantly, he’s thrown out the Iran nuclear deal, he’s certainly living up to his self given title.

Yesterday Donald Trump met with Russian president Vladmir Putin, in Finland. The much talked about meeting was surrounded with media furore and screams of “Traitor!” from journalists and congress alike. After all, Trump is Putin’s puppet isn’t he? If some media outlets across the USA are to be believed, Donald Trump has been an asset of the Russians since 1987.

What slipped under the carpet though, was Trumps glaring admission of his Israel first policy. Especially when it comes to the United States role in Syria.

The media is happy to parrot the unproven line that Trump and his US policy are controlled from Moscow, but no one seems, despite the clear evidence of his actions, to be able to able to take a look in the direction of Tel Aviv in search of puppet strings.

When asked if the USA and Russia would be working side by side in Syria, the Presidents answer seemed, to me at least, extraordinary.

He replied: “We’ve worked with Israel long and hard for many years, many decades. I think we’ve never – never has anyone, any country, been closer than we are.”

Who asked about Israel, Donald? We’re asking about Syria. Were you not paying attention in POTUS school? Never answer a question honestly. It looks to me like you’re saying your military presence in Syria, a sovereign nation, is at the behest of Israel. That true?

He went on: “President Putin also is helping Israel. And we both spoke with Bibi Netanyahu, and they would like to do certain things with respect to Syria, having to do with the safety of Israel. So in that respect, we absolutely would like to work in order to help Israel. And Israel would be working with us. So both countries would work jointly.”

Not content with giving Israel $38 Billion of US taxpayers money, they are also happy to send American troops into Syria, to die for the interests of the Israeli state. American citizens are being sent to kill, and be killed, for a foreign government. What happened to “Make America great again!”?

I think this unprovoked admission of foreign involvement in policy and decision making, makes Mr Trump far more of a “traitor” to the American people, than a sit down dinner with Vladmir Putin. 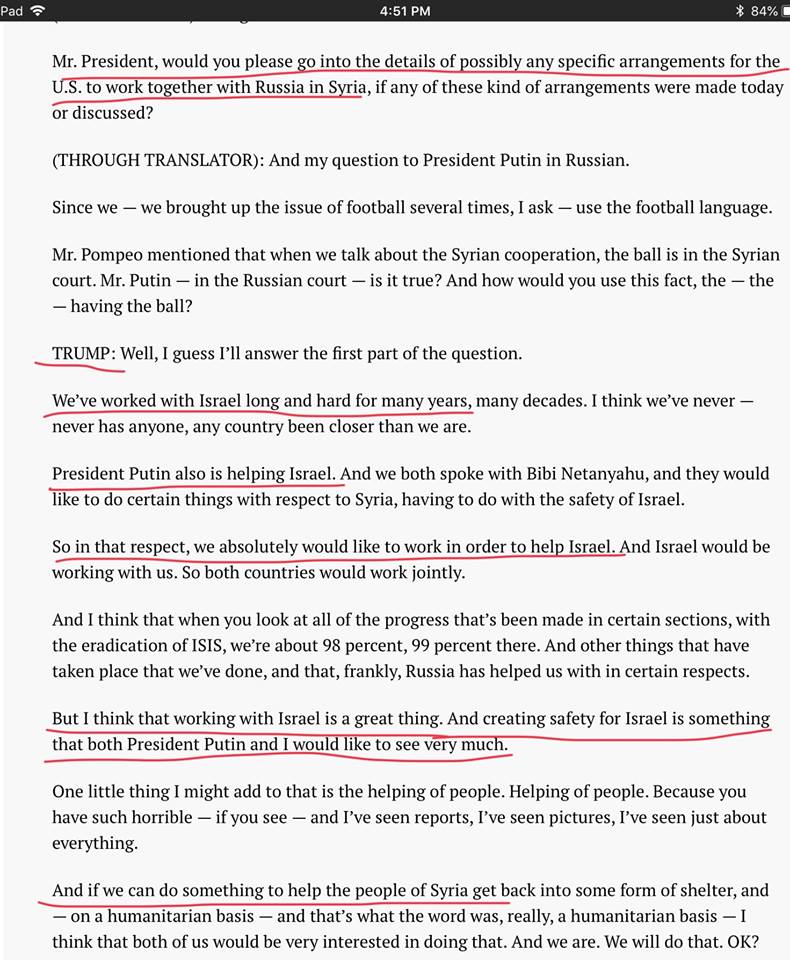