I don’t have a lot of internet availability in Germany, but I’ve managed to get some wifi for a few minutes.

I’m over in a town about an hour from Stuttgart getting treatment on my leg, and my spine.

Physically I’m a bit of a mess. When a woman that treats people that have been in wheelchairs for 30 years, looks at your spine, and says “Wow!”, you know you have issues.

I have/had vertebrae that were out of place and a spine as crooked as a politician. The ‘problem’ is, after years of playing through pain, and 5 surgeries, my pain threshold is through the roof. While that sounds like a positive thing, it isn’t.

Because I learnt to ignore the pain, I never did anything about is. Just got on with it. So 3 of my vertebrae, one rib and my sacrum have been completely in the wrong place for the best part of 25 years.

Yesterday I had all those vertebrae moved, and put back where they should be, while concious, and with no pain relief. If I had to describe the pain, it would be in BLOCK CAPITALS and contain quite a lot of swear words.

My back in agony, but my posture is correct and after another treatment today (that I’m dreading), I’ll be fixed and painfree for the first time in living memory.

Another thing, a bit random. When I woke this morning, I walked down to the hotel lobby to get tucked in to some food. I was quickly pointed towards the garden…where I saw this… 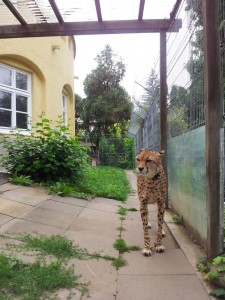 A leopard just pacing around the garden…

Yesterday, they played a film here in Germany. It was a film about the new technology they’ve been developing to regenerate spinal columns and muscle fibres.

The film features Windsurfing World Champions, Surfers, NBA Basketball players like Chicago Bulls Joakim Noah, and yours truly. Remember Who You Are was used as the main soundtrack of the film. Was pretty amazing to watch a film, in another Country, using your music. Very proud.

On the music front, I’ve been confirmed for this years Isle of Wight Festival. I’ll be playing on the Life’s A Beach stage again. As soon as I get the times, I’ll post them up.

I’m off to chill in the sun. The calm before the back breaking storm.