My contract arrives in the morning for the UK release of ‘A Brand New Battle’. I have to go through it and sign, but we’ve been talking for a while and I’m sure there will be no problems.

The label is called Eromenos Media and is based in Manchester. It’s only a UK release. This means in will only be available in record shops up and down the UK. Unfortunately all you guys outside the UK will still have to purchase CDs from the website. I’ll send a personalised message or something to make you feel special. 🙂

Or of course, you can download from itunes, amazon etc…

It’s only at the planning stage as I haven’t signed yet. But like I said, I don’t foresee any issues.

I’ll then be off on tour throughout October. I’ll be mainly playing Universities before ending the UK tour with a massive show at Wembley Arena on October 27th.

As soon as the dates are confirmed, I’ll let you know.

I’m really excited about what we can create here. Eromenos are a small up and coming company, full of drive and passion. That’s exactly what I wanted. So many bands sign to major labels and then sit on the back burner while the label focuses on their ‘major’ acts.

Plus, to be honest, with my surname, I could write Rubber Soul and I wouldn’t get a look in. You may not know this but a music investment company in London offered me £100,000 to release my first album, It gets worse at night. That was on the table on the condition that I changed my surname. As you can see by the name of my website, that didn’t happen. One thing I’m not, is a sell out. I’d rather be poor and look my maker in the eyes thanks.

Another great thing about Eromenos is they are a media company and film makers aswell. We’re already talking to a director about the next singles video.

It’s more than likely going to be ‘What’s love without meaning’. But that’s open to suggestion.

When I sign, I’ll be sure to post a staged signing photo. You know the annoying pose that footballers pull when they’re signing for a new club. Yeah, one like that.

Have been writing loads in the last few days. All very melancholic. I’m thinking I might get into a studio and make an acoustic album before I start work on another album proper. If these songs were the follow up to ‘A brand new battle’, I think I’d alienate any new listeners I got!

It’s been a pretty hard year so far. So the songs reflect that. A lot of pain and anger in the lyrics. I like the songs though and don’t want to waste them. I think an acoustic album would be a good idea. I’ll just give them away or something. But not to people that are contemplating suicide. I’ll probably send you over the edge!

Have my first gig since I moved, on Sunday. Playing the Pitcher & Piano in Derby. It’s just me an a couple of mates, playing some acoustic sets each.

It’s completely free and kicks off at 6:30. If you can make it, come say hey.

Anyway, I best go. The swimming pool is calling my name.

This morning I woke to the tragic news that at 2:30 am, Lewis Mighty passed away peacefully in hospital, aged just 7 years old. 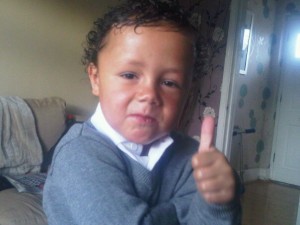 Lewis was diagnosed with Neuroblastoma in 2008, at the age of 3. Since then the Mighty family have been raising money for Lewis to have ground breaking treatment in the United States.

The target was £300,000 and as I write this, the money raised stands at £242,000. The very thought that money, a piece of paper, should be the difference between life and death, should sicken every one of us to our very core.

The Lewis Mighty Fund (http://www.lewismightyfund.org.uk) is incredibly close to many peoples hearts, including my own. People all over the Country attempting incredible feats to raise money for Lewis. BBC’s ‘Secret Millionaire’ even featured Lewis’s illness.

Despite all the pain and anguish, Lewis, and his Mum and Dad, never complained. They just kept on going, and kept on ploughing through. Lewis, Perry, and Jaime are a true inspiration to all of us.

I had the pleasure of hanging out with Perry a couple of times, and he even came to support me at one of my shows in Derby. He really is a top bloke and for someone like him to be suffering like this is heart breaking.

Lewis was symptom free for 2 years and all of us genuinely thought the little star had defeated this horrendous disease. But on May 12th is was reported that Lewis had taken a turn for the worst, and the Cancer had returned.

Since then the entire City of Derby came together in support of Lewis. Hundreds turned out to candlelight vigils, and thousands sent messages of support.

On Monday night we launched an attempt to get #prayforlewismighty trending Worldwide on twitter. Several locals and friends across the Country bombarded the site with messages of support.

With massive stars from the World of music, Football, and film, joining in,  #prayforlewismighty did in fact become the number one trend across the entire planet. A fitting tribute to an inspirational little boy, that has touched the hearts of all of us.

When I woke up this morning and heard the news, I, like everyone was truly devastated. As I write this, I am laying in bed with tears streaming down my face. But if a 7 year old boy can show such incredible courage, then so should we. As much as we mourn his passing, we should be celebrating what he achieved in a mere 7 years.

And more than celebrating his life, we should learn from it. If every single one of us wakes up every morning with the sole intention of being ‘more like Lewis Mighty’, then I really don’t see how we can go too far wrong.

In my eyes Lewis Mighty will always be a reason to be a better person. And I truly hope that Lewis passing will raise awareness of Neuroblastoma and therefore, save many other Children’s lives in the future.

In the past, I have completed two charity fundraising attempts for Lewis Mighty. (Videos at the bottom) But next year, when my leg is healed, myself and my friend Steve, will be attempting the biggest one yet.

Neuroblastoma is not well known enough, and awareness should be raised to this disease. I admit, before I came across Lewis Mighty, I had never heard of the disease either.

Next summer we’re swimming from the Isle of Wight to mainland England, walking the 191 miles to Derby, and then cycling on to Glasgow.

With every mental wall we hit, or pain barrier we are struggling with, one amazing little boy will push us through. A 7 year old boy with the heart of a Lion.

RIP Lewis Mighty, you are one special soul.